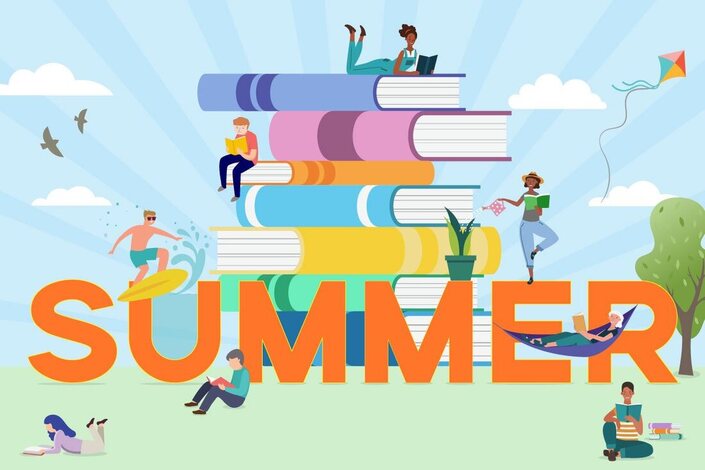 image via www.google.com
Going on vacation? Staying home by the pool? A book is a great way to pass the time!
Not sure where to start? Here's a list of books everybody's talking about! 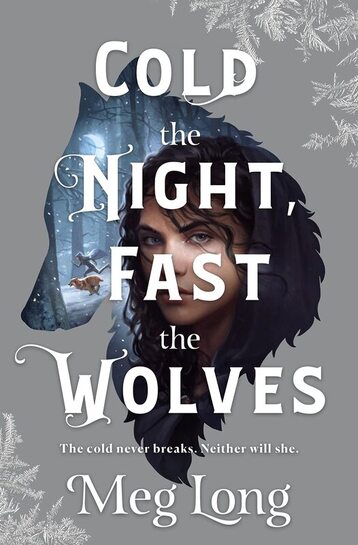 Cold the Night, Fast the Wolves by Meg Long

"A lone girl determined to survive. The feral wolf she must learn to trust.
Only one chance to escape their icy planet: a race across the deadly tundra.

Seventeen-year-old Sena Korhosen hates the sled race, especially after it claimed both her mothers' lives five years ago. Alone on her frozen planet, she makes money any other way she can--until she double-crosses a local gangster.

Desperate to escape, Sena flees with his prized fighting wolf, Iska, and takes an offer from a team of scientists. They'll pay her way off-world, on one condition--that she uses the survival skills her mothers taught her to get them to the end of the race. But the tundra is a treacherous place. When the race threatens their lives at every turn, Sena must discover whether her abilities are enough to help them survive the wild, and whether she and Iska together are strong enough to get them all out alive.

As the girl and the wolf forge a tenuous bond and fight to escape ice goblins, giant bears, and the ruthless gang leader intent on trapping them both, one question drives them relentlessly forward: Where do you turn when there is nowhere to hide?

Cold the Night, Fast the Wolves is a captivating, breathless debut about survival and found family that delivers a fresh twist on classic survival stories." 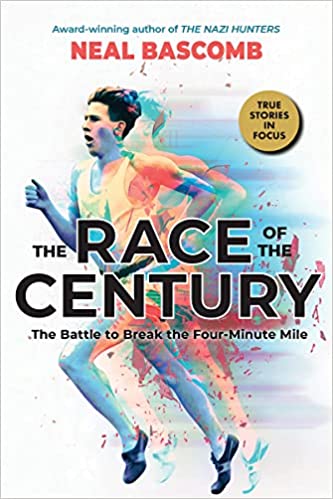 The Race of the Century: The Battle to Break the Four-Minute Mile by Neal Bascomb

"Highly acclaimed author Neal Bascomb brings his peerless research and fast-paced narrative style to a young adult adaptation of one of his most successful adult books of all time, The Perfect Mile, an inspiring and moving story of three men racing to achieve the impossible -- the perfect four-minute mile.

There was a time when running the mile in four minutes was believed to be beyond the limits of human foot speed. In 1952, after suffering defeat at the Helsinki Olympics, three world-class runners each set out to break this barrier: Roger Bannister was a young English medical student who epitomized the ideal of the amateur; John Landy the privileged son of a genteel Australian family; and Wes Santee the swaggering American, a Kansas farm boy and natural athlete.
​
Spanning three continents and defying the odds, these athletes' collective quest captivated the world. Neal Bascomb's bestselling adult account adapted for young readers delivers a breathtaking story of unlikely heroes and leaves us with a lasting portrait of the twilight years of the golden age of sport." 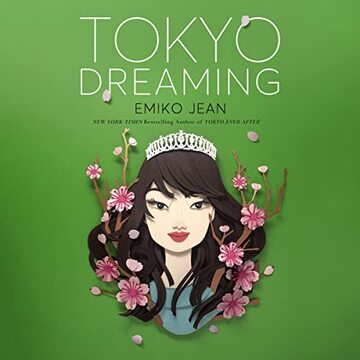 Tokyo Dreaming by Emiko Jean
​
The sequel to last summer's suggested reading is out now!

"Return to Tokyo for a royal wedding in Emiko Jean's Tokyo Dreaming, the sequel to the Reese Witherspoon Book Club Pick and New York Times bestseller Tokyo Ever After

When Japanese-American Izumi Tanaka learned her father was the Crown Prince of Japan, she became a princess overnight. Now, she’s overcome conniving cousins, salacious press, and an imperial scandal to finally find a place she belongs. She has a perfect bodyguard turned boyfriend. Her stinky dog, Tamagotchi, is living with her in Tokyo. Her parents have even rekindled their college romance and are engaged. A royal wedding is on the horizon! Izumi’s life is a Tokyo dream come true.

Her parents’ engagement hits a brick wall. The Imperial Household Council refuses to approve the marriage citing concerns about Izumi and her mother’s lack of pedigree. And on top of it all, her bodyguard turned boyfriend makes a shocking decision about their relationship. At the threat of everything falling apart, Izumi vows to do whatever it takes to help win over the council. Which means upping her newly acquired princess game.

But at what cost? Izumi will do anything to help her parents achieve their happily ever after, but what if playing the perfect princess means sacrificing her own? Will she find a way to forge her own path and follow her heart?" 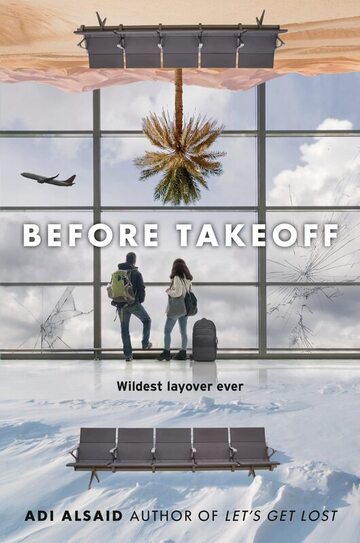 Before Takeoff by Adi Alsaid

"The Sun Is Also a Star meets Jumanji when two teens meet and fall in love during a layover-gone-wrong at the Atlanta airport in this thrilling new novel from the author of Let's Get Lost!

James and Michelle find themselves in the Atlanta airport on a layover. They couldn't be more different, but seemingly interminable delays draw them both to a mysterious flashing green light--and each other.

Where James is passive, Michelle is anything but. And she quickly discovers that the flashing green light is actually... a button. Which she presses. Which may or may not unwittingly break the rules of the universe--at least as those rules apply to Hartsfield-Jackson Atlanta.

Before they can figure up from down, strange, impossible things start happening: snowstorms form inside the B terminal; jungles sprout up in the C terminal; and earthquakes split the ground apart in between. And no matter how hard they try, it seems no one can find a way in or out of the airport. James and Michelle team up to find their families and either escape the airport, or put an end to its chaos--before it's too late." 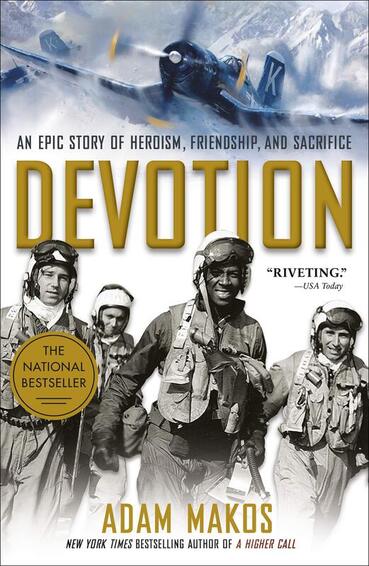 Devotion: An Epic Story of Heroism, Friendship, and Sacrifice by Adam Makos

This is an older title, but the movie will be released in October 2022, so it's a great opportunity to read the book first!
​
"​Devotion tells the inspirational story of the U.S. Navy’s most famous aviation duo, Lieutenant Tom Hudner and Ensign Jesse Brown, and the Marines they fought to defend. A white New Englander from the country-club scene, Tom passed up Harvard to fly fighters for his country. An African American sharecropper’s son from Mississippi, Jesse became the navy’s first black carrier pilot, defending a nation that wouldn’t even serve him in a bar.

While much of America remained divided by segregation, Jesse and Tom joined forces as wingmen in Fighter Squadron 32. Adam Makos takes us into the cockpit as these bold young aviators cut their teeth at the world’s most dangerous job—landing on the deck of an aircraft carrier—a line of work that Jesse’s young wife, Daisy, struggles to accept.

Deployed to the Mediterranean, Tom and Jesse meet the Fleet Marines, boys like PFC “Red” Parkinson, a farm kid from the Catskills. In between war games in the sun, the young men revel on the Riviera, partying with millionaires and even befriending the Hollywood starlet Elizabeth Taylor. Then comes the conflict that no one expected: the Korean War.

Devotion takes us soaring overhead with Tom and Jesse, and into the foxholes with Red and the Marines as they battle a North Korean invasion. As the fury of the fighting escalates and the Marines are cornered at the Chosin Reservoir, Tom and Jesse fly, guns blazing, to try and save them. When one of the duo is shot down behind enemy lines and pinned in his burning plane, the other faces an unthinkable choice: watch his friend die or attempt history’s most audacious one-man rescue mission.

A tug-at-the-heartstrings tale of bravery and selflessness, Devotion asks: How far would you go to save a friend?"

Looking for something else? 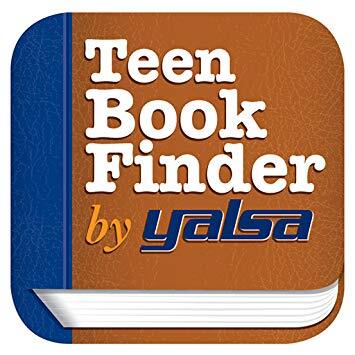 "The Young Adult Library Services Association (YALSA) has launched the Teen Book Finder Database, which is a one-stop shop for finding selected lists and award winners. Users can search this free resource by award, list name, year, author, genre and more, as well as print customizable lists." A great way to find a new book to read!
YALSA Book Finder